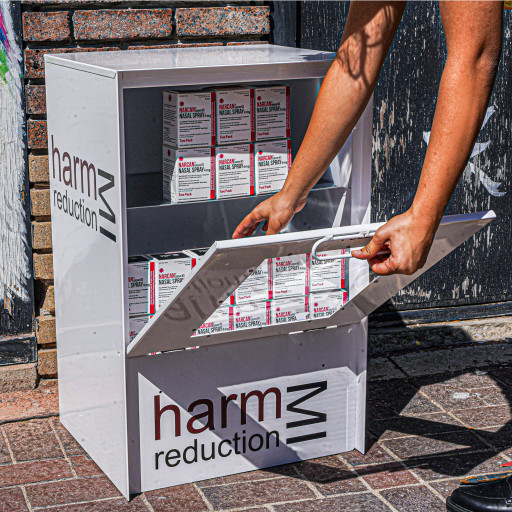 Harm Reduction Box
This is a real Narcan Distribution box in Michigan.

Mechanism Exchange & Repair, Inc. (MER), one of the last manufacturers of Newspaper Vending Machines, is finding their distribution boxes make their way around the country, but instead of newspapers, their distribution cases are being used to provide free access to life-saving Narcan for those who need it.

Mechanism Exchange & Repair has joined the nationwide fight against the opioid epidemic. One of the company's distribution boxes, "The PorchBox," was originally built for use as a Book Share Box and Food Share Box. The boxes resemble standard newspaper dispensers. The PorchBox can be found at various locations across the United States such as at festivals, bars, churches, on college campuses and outside of marijuana dispensaries. The boxes are being stocked with free doses of Narcan, a nasal spray designed to combat opioid overdose emergencies.

"We are thrilled to have our products be used in such a life-saving way," said The PorchBox manager Jeffery Card. "With the rise of fentanyl and other opioid-related overdoses, we understand the importance of having counteragents like Narcan readily available."

Opioid-related overdoses have been on a steady incline over the past few years largely due to fentanyl being found on college campuses across the country. Counterfeit pills containing fentanyl are replacing legitimate pills like Xanax, Adderall and Oxycontin, resulting in higher amounts of overdoses among college-aged people.

The CDC reported an almost 15% increase in overdoses caused by opioids from 2020 to 2021. As a result, universities and nonprofit organizations, such as Harm Reduction Michigan (HRM), have helped to increase the availability of the life-saving drug Narcan.

Pamela Lynch at HRM stated, "The newspaper-style boxes are very helpful in making Narcan available in communities that otherwise have limited access to it. They are very affordable in comparison to the repurposed vending machines that many organizations are using to provide easy access to this life-saving medication."

A standard vending machine can cost anywhere from $3,000.00 to $12,000.00 each. Conversely, The PorchBox distribution box costs $300.00 - $400.00, does not require electricity, and can quickly be moved into high-need areas as needed. Harm Reduction Michigan has 50 of MER's Distribution Boxes on the street and has plans to order 100 more soon.

As an opioid antagonist, Narcan works to restore the breathing of those who are experiencing an overdose. The counteragent comes as a nasal spray which makes for easy application in the event of an emergency. Use of the drug is as simple as inserting the dispenser into one nostril and squeezing down as one would with any other nasal spray. Narcan is known to have no effect on those who have not consumed opioids.

Previous article
Protenus Recognized as One of the Best Tech Startups in Baltimore for the 6th Year
Next article
New AI Service Summarizes Content: Introducing Notedly