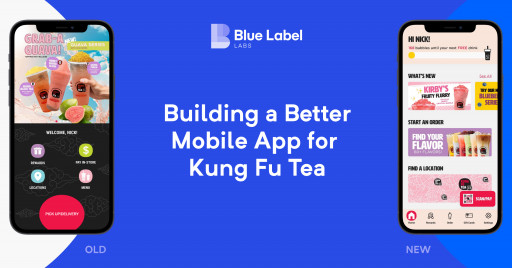 Kung Fu Tea is the largest and fastest-growing bubble tea chain in the U.S., but like many businesses, they initially opted for an off-the-shelf solution that allowed them to get a mobile app on their customers' smartphones quickly.

However, as demands grew and competition mounted, the company partnered with Blue Label Labs to develop a new mobile app.

Some notable factors of what went into creating the new app:

Users will notice that several front-end elements have changed for the better:

Rather than static promo graphics, KFT now has a modular system that allows them to place more refined promotional links, content, and images that customers can quickly scroll through.

#2 The ordering process has been simplified

The ordering process has fewer steps and screens, reducing ordering time and confusion. Blue Label Labs has also made the app much more friendly when users need to back up or change something.

While previously a customer would have to start their order all over if they made a mistake (leading to many abandoned orders), the new app makes altering an order a breeze.

The overhauled rewards system also helps loyal customers make the most of their experience. As a tie-in with their motif, rewards are now reflected in belts to indicate a customer's reward ranking.

This custom, flexible rewards system allows users to easily navigate and scroll through items, increase their in-app credits and redeem their rewards.

Kung Fu Tea has 340 locations nationwide, some of which are TKK locations offering food items.

The new app allows customers to quickly toggle between the KFT and TKK menus, which will help promote the different varieties of food and drink available for order within the app.

The new Kung Fu Tea app is in beta and launching soon to the general public on iOS and Android.

Blue Label is an award-winning, remote-first team agency operating around the globe.

Partnering with ambitious companies, they build apps that truly transform businesses and connect meaningfully to the people that use them.