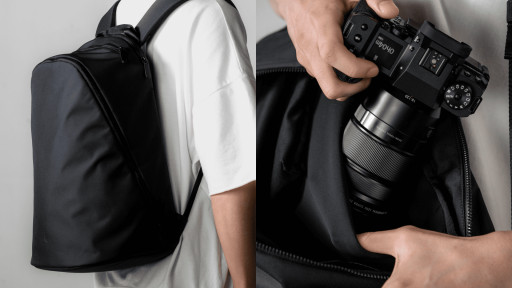 kyu from TranSe Inc., a Japanese Imaging brand, launched the kyu daypack, a versatile but minimalistic- designed camera bag, on Kickstarter on Aug 12, 2022. The crowdfunding, started in Japan, raised over $20,000 in 24 hours, which accomplished the target of $15,000. The selling price after crowdfunding ends will be ¥19,000, but the kyu team offers a 20% discount special price on Kickstarter.

A new camera bag launched by kyu aims to fulfill both functionality and simplistic design that contribute to optimizing the value of cameras. Also, its simplistic visual is well designed to make it fit reasonably in users' everyday life.

Because of the concerns over the commoditized camera equipment and overflown photos in our smartphones, the kyu team initiated the project based on the mission "to reinvent the means of keeping records."
Over a year of development by repeating trials and errors of four patterns and 10 prototypes, "kyu daypack" was finalized and launched as an official product.

The kyu team broke the ice to develop a camera bag that fits well in users' everyday life and has both stylishness and functionality with the concept of a "clean-look camera bag for everyday use."

"Over a year of development and invention of this camera bag, it is a great happiness to announce the release of the kyu daypack," said Okawa Yusuke, project owner of the kyu team. This camera backpack assists users in carrying out their cameras in their everyday life. For whatever purposes, such as filming a Vlog, keeping family records, and for anyone who loves to take photos, this multifunctional, highly fashioned kyu daypack offers to make the everyday camera use experience more fruitful.

As one of the projects launched by TranSe Inc., kyu is dedicated to producing camera accessories that bring out the value of a camera and promote camera use in daily life. Starting from this project, the journey of kyu has just begun, and it will continue making efforts to support camera users by producing instruments to help them keep records.