Table for 92 Cooking Through the Periodic Table of Elements&#8482; 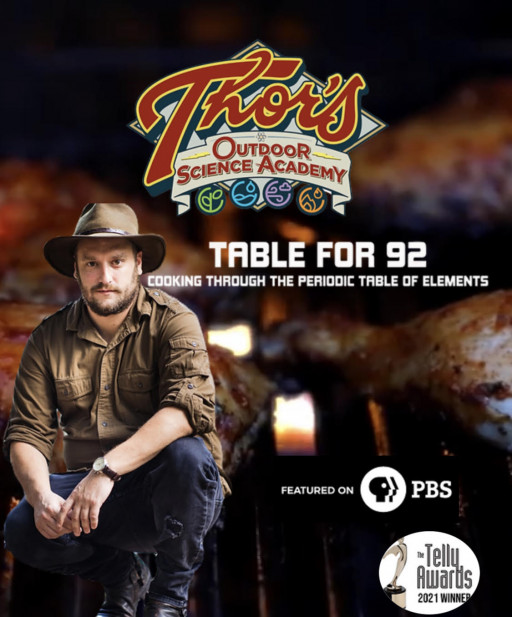 Thor, from Thor's Outdoor Science Academy™, is a trained archaeologist as well as an avid hunter, fisherman, forager, and gardener. Combining all his interests, the academy is now releasing a series of entertaining and educational videos called Table for 92, with Thor literally cooking through the periodic table of elements.

"Science is a way to help make sense of the world, and I believe the fundamental order of the universe can be explained in the periodic table of elements," said Thor, whose work has been featured on PBS and earned a 2021 Telly Award. "Many elements are found in the foods we eat every day, while others are found in the way food is processed and preserved. Table for 92 - Cooking Through the Periodic Table of Elements™ is an interactive way to understand these elements, while having a great time - and making a lot of fire."

Thor built an outdoor kitchen, complete with a fire pit, grill, and rock oven, for the production of the "Table for 92" series. Most of the meat cooked has been prepared on an Asado grill, a food preparation method from Argentina.

"I was almost brought to tears the first time I ate a chicken thigh cooked in this way," Thor jokes. To accompany the series, Thor is creating a cookbook that features history, science, culture, and recipes based on the elements.

Join Thor on his YouTube channel for the launch of "Table for 92" on Sept. 23, 2022, and discover for yourself how neon, cobalt, and argon can be tasty and interesting! New shows will air every Friday.

With a degree in anthropology from the University of Colorado in Denver, Thor worked as an archaeologist on numerous digs and excavation sites around the world, as well as served as a resident educator at Dinosaur Ridge, an outdoor museum in Colorado known as one of the world's most famous dinosaur fossil localities. Easily educating over 200,000 museum guests in his time, Thor learned how to make science come alive and connect with others.

Combining his love for science with a passion for education, beginning in 2020, Thor developed a series of experiential science videos that aired on PBS, Thor's Outdoor Science Academy™, where he tackles the elements of earth, air, fire, and water. Exploring these elements through science, history, language, food, and great stories, Thor is entertaining and educating viewers of all ages on our great big world of yesterday, today, and tomorrow.

The academy's episode "Hot Sauce" was named a Silver Winner for Non-Broadcast, General-Nature/Wildlife in the 42nd Annual Telly Awards in 2021. The Telly Awards honors excellence in video and television across all screens and is judged by leaders from video platforms, television, streaming networks, and production companies.

Learn more about Thor's Outdoor Science Academy™ at thorsoutdoorscienceacademy.com or follow on social media at:

Original Source: Table for 92 Cooking Through the Periodic Table of Elements™