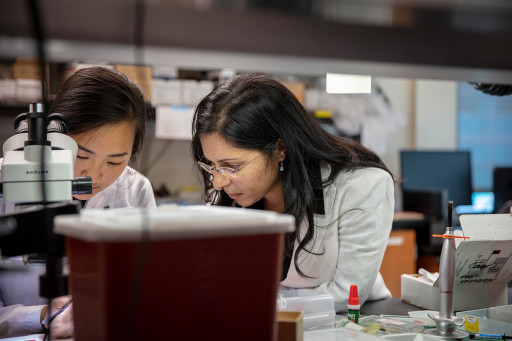 They come from around the world—born in Taiwan, India, Lebanon, Israel, Romania, and Russia, among other places—but they all call the United States home. The scientists presenting at the first Vilcek Science Symposium, taking place Oct. 19-20 at Gladstone Institutes, have something in common other than their top-notch, award-winning research: they're all immigrants.

Organized in partnership with the Gladstone Institutes, the symposium, "Science Crossing Borders: Celebrating the Contributions of Foreign-Born Researchers in the United States" aims to recognize outstanding science by researchers born outside the U.S. It also provides a platform for the researchers to share their personal stories, network with one another, and raise awareness of the impact of immigration to inclusive and high-quality science.

"Even though we come from diverse backgrounds and study very different topics, immigrant scientists share some common experiences," says Jeanne Paz, Ph.D., conference chair and associate investigator at Gladstone. "We thought it would be nice to meet, create opportunities for collaboration, and brainstorm how we can support trainees who are coming from other countries."

"This symposium represents the first time that Vilcek Prizewinners in biomedical science have a specific opportunity to connect in an academic context," says Jan T. Vilcek, MD, Ph.D., co-founder, CEO, and chairman of the Vilcek Foundation. "We hope that the two-day program will help these leaders learn more about one another's work and create space for potential collaborations moving forward."

A Chance to Connect

In 2019, Paz won a Vilcek Prize for Creative Promise in Biomedical Science for her research on epilepsy. At the annual Vilcek Awards Gala, she and fellow winner and scientist, the late Angelika Amon, Ph.D., struck up a conversation about some of the unique challenges that immigrant scientists face. They started brainstorming ways to strengthen the community of Vilcek Prizewinners and proposed the idea for a symposium.

"When Jeanne Paz and Angelika Amon approached us in 2019 about developing an academic forum for our Vilcek Foundation Prizewinners, we were delighted," says Vilcek. "It is a testament to Angelika's lasting impact as a mentor to see this symposium realized, and it speaks deeply to Jeanne's leadership in supporting the next generation of scientists at the Gladstone Institutes."

"We are thrilled to host this exciting symposium," says Lennart Mucke, MD, of the Gladstone Institute of Neurological Disease. "An immigrant myself, I deeply appreciate the efforts of the Vilcek Foundation and the pioneering contributions of these outstanding speakers. Their paths beautifully illustrate that science truly is universal and boundless."

The scientists presenting at the upcoming symposium work in diverse fields—from physics to biomedicine—and Paz hopes that getting them all in one room will create new collaboration and networking opportunities. But she also hopes that students will tune in for the talks and be inspired by their personal stories.

"There's often this idea in the scientific community that to be successful, you have to come from a very famous lab and follow a particular path, and it's important for young scientists to see that doesn't have to be true," says Paz. "You can come from a very difficult background and move far away from your support network and succeed because you pursued a path that you were passionate about." Paz herself was born in the Republic of Georgia and moved to the United States for her postgraduate research.

Many Vilcek Foundation Prizewinners credit not only their backgrounds but the purposeful diversity of their labs with helping them think more expansively about their research subjects. With those messages in mind, the symposium organizers have arranged roundtables, mentoring opportunities, and a panel discussion with a handful of attendees about how being an immigrant has shaped their science.

"There is no singular immigrant story or experience, and while our prizes recognize immigrant scientists, each of our prizewinners has a unique experience, focus, and insight that has contributed to their success," says Rick Kinsel, president of the Vilcek Foundation. "We hope to make this diversity apparent, and to bolster individuals' understanding of the ways that immigration has a positive impact on our scientific communities, and on society more broadly."

Learn more about the symposium: Science Crossing Borders: Celebrating the Contributions of Foreign-Born Researchers in the United States

The Vilcek Foundation raises awareness of immigrant contributions in the United States and fosters appreciation for the arts and sciences. The foundation was established in 2000 by Jan and Marica Vilcek, immigrants from the former Czechoslovakia. The mission of the foundation was inspired by the couple's respective careers in biomedical science and art history. Since 2000, the foundation has awarded over $7 million in prizes to foreign-born individuals and has supported organizations with over $5.8 million in grants.

Scientist Jeanne T. Paz and a researcher work together in a laboratory at the Gladstone Institutes. Paz has long dark hear and wears wire-rimmed glasses and a white lab coat.