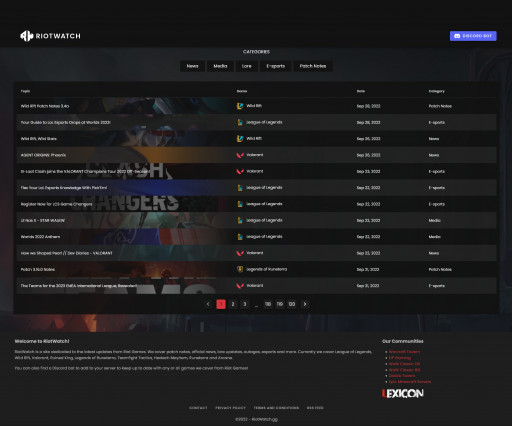 Between e-sports, patch notes, and countless special events, it can be tough to keep up with all the latest Riot Games news. With that in mind, Lexicon Gaming has created a unique news collator that makes it easy to find the most recent info on Riot Games titles. RiotWatch collects news from all of Riot's major titles, including League of Legends, Wild Rift, and Valorant, then distributes only what users want to be updated on. Whether players want to watch the newest lore video, learn about in-game events, or figure out how badly their favorite champion just got nerfed, RiotWatch has them covered - head to RiotWatch.gg now to check it out.

For gamers who want to keep their community in the loop as well, Riotwatch.gg isn't the only way to use this new tool. RiotWatch also has a Discord Bot that makes it even easier to keep up with what's happening in all the Riot titles. It's quick and simple to install, and customizing it is equally straightforward. The bot can be set to filter updates by game and category, so channels aren't flooded with news people don't care about. The Discord bot can be added to a server by heading to riotwatch.gg/discord-bot.

RiotWatch is one of many tools and resources Lexicon Gaming has brought to the video game community. From our detailed walkthroughs on EIP.gg to our World of Warcraft Classic tools, Lexicon Gaming is dedicated to creating great content for hardcore gamers.