On the 100th Episode of the Masked Singer on Fox, Tag Team Electrifies With a Stellar 90s Night Performance 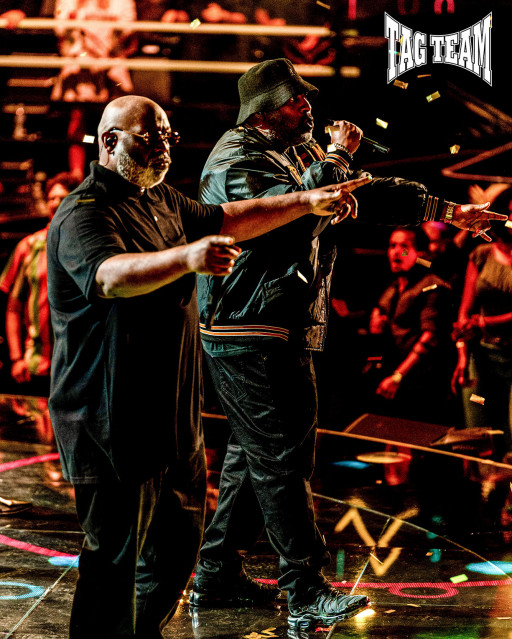 To celebrate the 100th episode of "The Masked Singer," Fox enlisted Tag Team, the kings of 1990s nostalgic pop music, to inject their brand of "90s night" energy with an epic cameo for the ages. The historic hip-hop duo opened Season 8, Episode 6 of the show with a rousing concert performance of their iconic, multi-platinum 1993 hit "Whoomp! (There It Is)"—sending the studio audience and show judges into a spine-tingling frenzy.

Following the initial excitement, Tag Team's DC "The Brain" Supreme introduced the show's host, Nick Cannon, with the rallying energy of a 1990s Mike Tyson heavyweight championship fight. As the show continued, Tag Team increased the hype to an old-school, 90s house party, serving as clue bearers and interacting with the host, judges, and celebrity guests on TV's #1 top-secret singing competition. Spoiler Alert: Joey Lawrence and Nick Lachey stopped by to dap it up with Tag Team in the show's VIP area.

During the show's Grand Finale … well, to find out, catch the full season 8 episode 6 of "The Masked Singer" now streaming on Hulu.

Pam Matthews, the fearless CEO of IEBA, helped make this happen, and for the next four days, Tag Team was the talk of the conference. The duo, consisting of Cecil "DC The Brain Supreme" Glenn and Steve "Rolln" Gibson, is now poised to book a plethora of 90s nostalgia concerts, primetime television performances, and celebrity appearances in 2023 and beyond.

The Masked Singer appearance was the culmination of several hectic weeks for Tag Team. The duo helped start the 2022-2023 NBA season with a halftime performance for their hometown Denver Nuggets. In front of a sold-out crowd of nearly 20,000 in the Mile High City, the 1984 graduates of Denver's Manual High School brought the fire with unmatched energy that helped the Nuggets secure the win. That's what Tag Team does.

Next was a quick international excursion to "The Sands Rocks 2022" 80s music festival at the Planet Hollywood Beach Resort in Cancun, Mexico. Tag Team gave fans another amazing live concert performance along with Morris Day, Klymaxx, Vanilla Ice, Flava Flav, and more, as well as a rousing introduction by the one and only MTV's "Downtown Julie Brown." The event brought to mind youthful, nostalgic memories of a time when we really used to party.

DC's acting career continues to flourish, fresh off a memorable Season 2 Episode 6 co-star role in the STARZ hit show "P Valley." His portrayal of Gibby Burns (inspired by legendary Memphis old-school fire barber Warren Lewis) was memorable. The scene with principal characters Lil' Murda (J. Alphonse Nicholson) and Tyke (Thaddeus Wilks) is a fan favorite from the episode. Along with his ride-or-die representation, the People Store agency in Atlanta, DC and his team continue to work on new projects while navigating Tag Team's busy tour schedule.

Be on the lookout for a DC Glenn motivational speaking gig as preparation continues for the launch of his corporate speaking career. Preparing with his colleagues and mentors from the Georgia chapter of the National Speakers Association has been a great incubator for DC to network and collaborate with his fellow associates.

The current bread and butter for Tag Team are concert performances, and Primetime 90s-themed network television performances. They are booking for the 2022 holiday season and appearances for 2023, which marks the 30-year anniversary of the release of "Whoomp! (There It Is!)" as a worldwide hit. Book Tag Team today -- with confidence!

Please direct all acting and voiceover inquiries via email at [email protected] or via telephone at (404) 874-6448, The People Store in Atlanta, GA.

Original Source: On the 100th Episode of the Masked Singer on Fox, Tag Team Electrifies With a Stellar 90s Night Performance