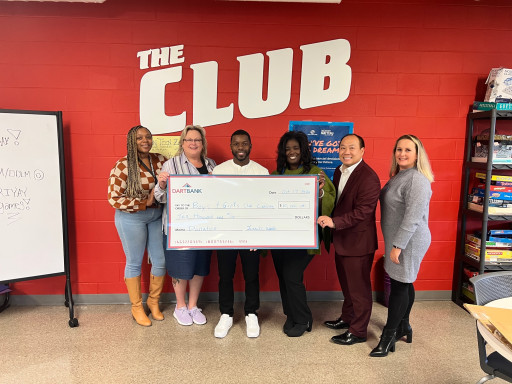 Lansing, Michigan, influencer Terrell Wade, who goes by TheWadeEmpire on social media, is giving back in a big way by donating $10,000 dollars to the Boys and Girls Club of Lansing. "Giving back is an important and essential aspect of growth," says Terrell Wade, and his growth is imminent. Wade, a Michigan native and Michigan State alumni, has quite the online presence. He grew his social media to over 1 million followers on TikTok and over 320K followers on Instagram by primarily creating hilarious and relatable workplace videos under the name @TheWadeEmpire. "It's been an extremely successful career move for me becoming a content creator and seeing the rise in popularity for my brand."

Wade is no stranger to the Boys and Girls club either. "I grew up in the Boys and Girls Club (of Troy). When I was younger, summer after summer my brother and I would ride our bikes two miles to our nearest club and back home. It was a big part of my childhood and where I spent most of my time during the summer. I enjoyed my time so much that I ended up becoming a staff member for a few years when I got older. Definitely a full circle experience to say the least."

"Without the Boys and Girls Club I don't know what my summers would be like as a young teen, and I could be a completely different person now. I want to be able to help make sure that this program continues to grow and provide other young children and teens with a SAFE space to learn, grow, make friends, and ultimately have fun. So that is why I am donating $10,000 to this organization because it has meant a great deal to me, and I want it to continue so that the next kid can have a similar or even better experience than I did. It is a blessing to be a blessing."

With no intentions of slowing down on social media, Wade hopes that his success as The Wade Empire continues to grow. He hopes that it will help him to join the infamous Boys and Girls Club Alumni Hall of Fame, which includes pro-athletes, business leaders and award-winning actors, such as Denzel Washington and Shaquille O'Neal. Only time will tell.