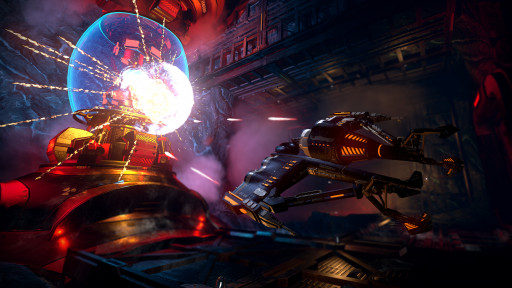 Little Orbit Inc., the publisher of APB Reloaded and Fallen Earth, has been quiet for the last couple of years, but it now looks like big things are in the works as they finalize the release schedule for their 6DOF shooter Ships That Fight Underground - better known as STFU.

Originally launched on Kickstarter in 2015, the game promises to re-imagine the six-degrees-of-freedom genre made popular by Interplay's Descent back in the mid-1990s with the following features:

Recently, Little Orbit released a series of Medium articles explaining their Web 2.5 approach to the game, which will have two independent but connected ecosystems that allow players Free-to-play access or Create-to-earn.

Matt Scott, Little Orbit's CEO, says the initial Beta release date is planned for the end of 2022, and part of that rollout will embrace Little Orbit's Web 2.5 strategy. "Our design supports both a traditional game economy and a blockchain create-to-earn economy. No NFT gimmicks. No smoke and mirrors. This is a real game with full shooter mechanics that also focuses on user-generated content (UGC). This game has been in development since 2013. The primary development is done, but I feel it is important that we meet the ever-evolving needs of modern-day players, including rewarding them for their creations that get used in-game. In addition to the level design tools, we are just taking the proper time to finish off the last of some big-ticket features like multiplayer co-op that we spent years talking about."

So far any level of blockchain integration in games has been met with controversy lately. Little Orbit's initial announcement was been met with some confusion and skepticism by players, especially the original backers from Kickstarter and Early Access Steam.

Scott sends them a direct message. "You're going to get the game you paid for. Pure and simple. Most importantly, no one will have to engage with Blockchain mechanics if they don't want to. Neither F2P nor C2E will have an advantage over the other. The ships are functionally identical. They just represent different ways to interact in our ecosystem."

For fans of Blockchain, the project's whitepaper can be found here: https://little-orbit.gitbook.io/stfu/whitepaper/ships-that-fight-underground

In the coming weeks, Little Orbit will open developer access to their community along with a detailed roadmap for releasing the initial version of the game.

Little Orbit is partnered with 100 Days Ventures, a Web 3.0 company focused on aiding companies with their transition from the traditional markets over to the blockchain world. 100 Days Ventures will be launching their cutting-edge NFT marketplace the first week of September. STFU's Pilot Licenses will be the first to release using this product on Sept. 9.

Little Orbit is a worldwide video game publisher formed in January 2010 with a focus on AAA licensed-based entertainment products. The company's emphasis is on working with popular creators to extend their vision into games through transmedia storytelling and engaging content for all gaming platforms.