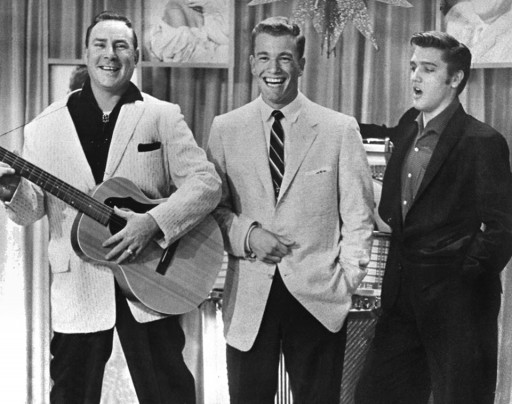 On Aug. 14 and again on Aug. 16, starting at 9 a.m. PT both days in honor of the 45-year anniversary of Elvis Aaron Presley's death on Aug. 16, 1977, KWXY Music Radio out of Palm Springs, California, is set to broadcast and livestream "The Elvis Presley Story" featuring broadcast legend Wink Martindale. The 14-hour program - created by Martindale, who was one of Elvis' long-time friends - features rare content and interviews with Presley and others from his inner-circle.

Martindale's "The Elvis Presley Story" explores the career of the world's most iconic entertainer through insightful and engaging interviews from those who knew him best. It is the most comprehensive story on Elvis ever produced, according to Martindale.

Martindale says he became a big fan after listening to the first airing of Presley's single 'That's Alright Mama' on July 8, 1954, after listening to it from inside the station - WHBQ in Memphis, where he worked at the time. Shortly thereafter, Martindale had Elvis on his TV show 'Top Ten Dance Hour' which would become The King's first television appearance.

"I'm so fortunate to have witnessed American music history," he said. "And I am thrilled to be able to share 'The Elvis Presley Story' with a new and worldwide audience."

Winston Conrad "Wink" Martindale is an American disc jockey, radio personality, game show host, and television producer. He began his broadcasting career in radio in 1952 and is known as the most successful game show host in the world and one of the first inductees into the American TV Game Show Hall of Fame in Las Vegas. Over the last 70 years, Martindale has produced numerous radio and TV programs and received a star on the Hollywood Walk of Fame for his contributions to entertainment.