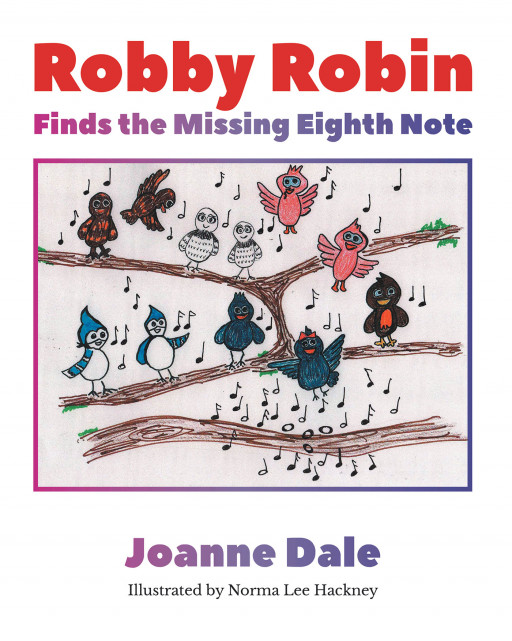 Fulton Books author Joanne Dale, a public school music teacher for 35 years, has completed her most recent book "Robby Robin Finds the Missing Eighth Note":  a story that will help young readers explore and appreciate music. In the late '50s, she and her pastor husband adopted two babies from Korea. Music was always a part of their school, home, and church lives. She now has three grandchildren and six great-grandchildren, and she loves to have her great-grandchildren read their favorite books to her.

The book is illustrated by Norma "Lee" Hackney, who loves to draw and have fun. After more than two decades of service in the U.S. Navy, Hackney became the director of the Shawnee Hills Arts Council in Anna, Illinois. When Lee is not at the arts center, she is a woman with a hammer renovating three-century-old buildings.

Published by Fulton Books, Dale's book is set at Mister Owl's music class in a big oak tree that holds many mysteries.

One day in class, suddenly, a big knot on the tree started to move and rumble.

What's going on? All the birds and the music notes wondered, "What's causing the tree to make such a noise?" It's up to Robby to unlock the mystery.

Readers who wish to experience this adventure along with Robin and his friends can purchase "Robby Robin Finds the Missing Eighth Note" at bookstores everywhere, or online at the Apple iTunes store, Amazon, Google Play or Barnes & Noble.