Jazz at the Ballroom Presents ‘Accentuate the Positive’ September 16 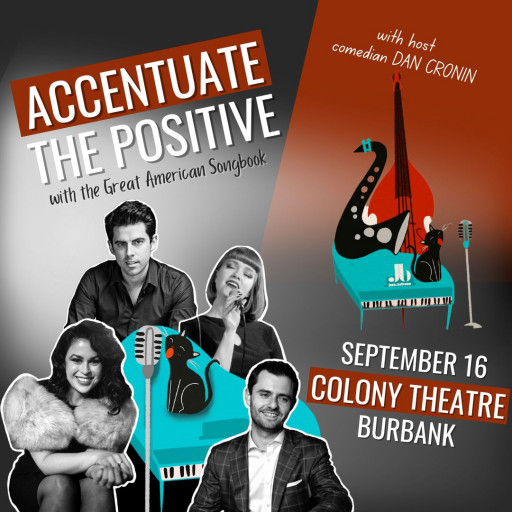 JAZZ AT THE BALLROOM (JATB) comes to the Colony Theatre in Burbank to present "Accentuate the Positive," a performance of the unforgettable music from the Great American Songbook on Friday, Sept. 16 at 8:00 p.m.

JAZZ AT THE BALLROOM is a Bay Area- based nonprofit committed to keeping swinging, classic jazz thriving, sharing the American Songbook with the greater public, and providing audiences with one-of-a-kind performances. Beyond their concerts, the organization works to introduce, teach, and explore this American art form through workshops, public events, and performances at schools, hospitals, and senior living communities. Through these efforts, they keep the unforgettable music alive in the community and foster a love of music in future generations.

DAN CRONIN is an Emmy-winning writer, comedian and actor/voiceover artist, known for his work on "The Tonight Show with Conan O'Brien" (for which he received five Emmy nominations) as well as "Conan" and "Indigo Wisemen: In Their Own Words."

KONRAD PASZKUDZKI, the concert's pianist and bandleader, serves as Artistic Director of Jazz at the Ballroom. Originally from Perth, Australia, Konrad came to the U.S. for grad school at Miami's Frost School of Music and moved to New York to lead the house trio at 54 Below. In 2013, Konrad joined the John Pizzarelli Quartet. His 1000+ performances include such venues as New York's Café Carlyle, Bemelmans, Birdland, and Dizzy's; DC's Blues Alley, Montreal Jazz Festival, and LA's Walt Disney Concert Hall.