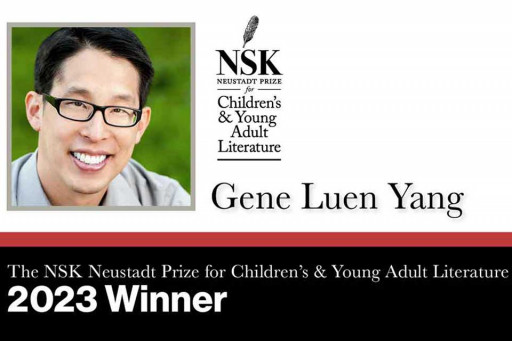 World Literature Today, the University of Oklahoma's award-winning magazine of international literature and culture, today announced Gene Luen Yang as the winner of the 2023 NSK Neustadt Prize for Children's and Young Adult Literature. He is the first graphic novelist to win the prestigious prize.

Yang's American Born Chinese was the first graphic novel to be nominated for a National Book Award and the first to win the American Library Association's Printz Award.

In 2013, Boxers & Saints, his two-volume graphic novel about the Boxer Rebellion, was nominated for a National Book Award and won the Los Angeles Times Book Prize. In 2016, the Library of Congress, Every Child a Reader and the Children's Book Council appointed Yang the National Ambassador for Young People's Literature, and he was a three-time honoree for the 2021 Eisner Awards.

Trung Le Nguyen, an award-winning comics writer and artist, nominated Yang for the NSK Prize and chose his graphic novel American Born Chinese as the representative text for the jury to read.

"American Born Chinese deftly handles issues of immigration [and] internalized racism as if believing in the capacity for very young readers to synthesize disparate and complicated modes of written communication," Nguyen wrote in his nominating statement.

Kathy Neustadt, representing the Neustadt family, made the announcement during the annual Neustadt Lit Fest. The next lit fest will be given in Yang's honor in October 2023.

A blue-ribbon jury selects the finalists and the winner based solely on literary merit as well as the importance of the writer's contribution to children's and young adult literature. NSK winners are awarded $35,000, a silver medallion, and a certificate of recognition.