August 3, 2022
Share
Facebook
Twitter
Pinterest
WhatsApp
The series' celebrated cast and production company aim to increase representation for South Asians in entertainment and believe crowdfunding will engage fans and allies so the show and its audience can maintain and collaborate on creative control 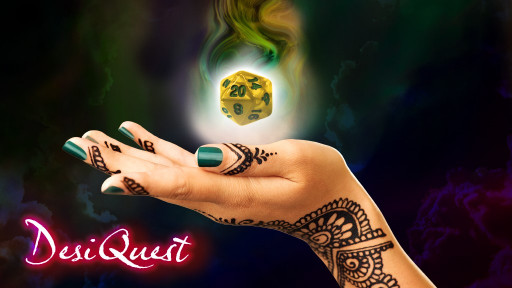 DesiQuest to Launch on Kickstarter

DesiQuest is the first premium tabletop role-playing game (TTRPG) streaming series to tout an all-South Asian cast. Similar to the cult-favorite Dungeons and Dragons, DesiQuest centers around South Asian celebrities and comedians to showcase the mythos and traditions from their shared culture rather than a Eurocentric one.

"We can make something truly special that will reach an entirely new audience for D&D, and capture the imaginations of America's fastest-growing minority population," says show Executive Producer and Director Sandeep Parikh. "Great stories from underrepresented voices not only move the needle when it comes to reach and profit, but most importantly, they can change hearts, and increase empathy for the 'other.'"

The series is being produced by EffinFunny, the award-winning production house behind gaming series favorite The Legend of Neil, and known for pioneering interactive production with Wizard School Dropout.

"Being that this is the first of its kind with South Asians playing solely with other South Asians from across the diaspora, and digging deeply into character creation that will likely reflect their own experiences, this will end up being immensely emotional & cathartic," says Jasmine Bhullar, Game Master and Executive Producer of the series. "But the cast being filled with improvisers will keep it digestible, fun and silly throughout."

Bhullar is a rising star in the TTRPG space, having made appearances on popular D&D live play series Critical Role, Dimension 20, and DnD Beyond. As the concept's originator, she envisioned a show wherein South Asians would be central cast members, rather than guests rotated out on the series. When Bhullar shared her concept with EffinFunny, they went all in to support bringing her vision to life. In addition to being a comedy-centered production company, EffinFunny has a long history of commitment to increasing representation of South Asian and other underrepresented characters.

The creators chose to crowdfund the series on Kickstarter in lieu of traditional funding methods in order to keep the series authentic, involve audience members, and maintain creative control. They're calling on all Desis in the diaspora who want to see more of their own faces on screen, and to the TTRPG allies who want to help expand the horizons of the fantasy universes to include South Asian stories.

"I've lived on that hyphen in the Indian-American or South Asian-American label for far too long, and want to find a way towards my roots that's accessible and joyful," says Parikh. "No matter what we look like, we all love to don bada** armor and slay demons."

To contribute to the series, visit the project on Kickstarter.

For media inquiries, reach out to [email protected].