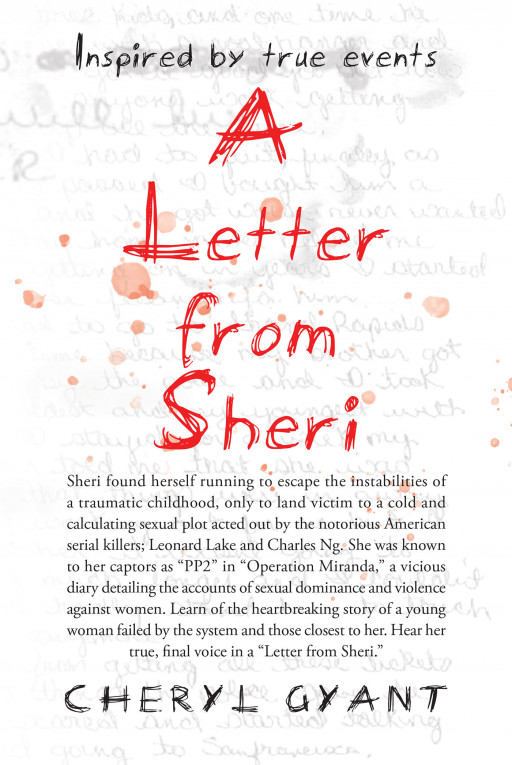 Fulton Books author Cheryl Gyant, a kindhearted woman, a loving mother and wife, a master storyteller, has completed her most recent book "A Letter from Sheri": an intriguing fiction inspired from the story of Cheryl Gyant's birth mother. With all the information she gathered from years of her investigation, Cheryl successfully helmed a detailed story concerning her biological mother's life and the disturbing events that led to her death. This is an emotionally charged tale that will stir a lot of emotions in its readers.

Gyant shares, "A Letter from Sheri is a story inspired by the 1986 California serial killer murders executed by Charles Ng and Leonard Lake. I began writing a book in 2001 about how it felt to be adopted. As a child, I was led to believe that my biological mother was murdered by my biological father. When I was a teenager, I dove deep into a seemingly endless search that spanned a decade, searching for answers. As an adult, my biological Aunt found me and confirmed that my mother had been a victim of the Calaveras County, California, Charles Ng and Leonard Lake serial killings, in 1985. After reaching out to the since-retired detective on her case, he sent me an eleven-page letter written by my mom that had somehow been gleaned from a sea of evidence left at the crime scene. It answered almost every question that I had. After learning everything through her letter, my biological father, and my adoption files, I finally concluded that she never had a voice or a chance in life. My attempt to become her voice gave way to a passion to tell a whole new story. A story once about my search for answers as an adoptee had been transformed to the harrowing story of a victim: 'A Letter from Sheri'. The details accounted in the letter tell the story of a life of trauma that started at an early age, and culminates with Sheri's life in the hands of ruthless serial killers when she took her last breath."

Published by Fulton Books, Cheryl Gyant's book is a page-turning read on the suffering of a victim who has lost the chance to tell her story. The author excels in creative writing and she uses her talent to give voice to her deceased mother in this opus.

Though based on true events, some elements of this story have been altered for dramatic purposes.

Readers who wish to experience this tear-jerking work can purchase "A Letter from Sheri" at select bookstores, or online at the Apple iTunes Store, Amazon, Google Play or Barnes & Noble.

Original Source: Cheryl Gyant's New Book 'A Letter From Sheri' is a Riveting Novel That Follows the Life and Murder of an Incredible Woman

Previous article
Author Mireya S. Kylie’s New Book ‘The Value of a Penny’ is an Adorable Tale Extolling the Virtues of Working Hard and Helping One’s Friends Succeed
Next article
Pete Cornia’s New Book ‘A Cowboy’s Christmas’ Tells A Lovely Fiction Of An Unfortunate-Turned-Wondrous Holiday Of A Lost Cowboy