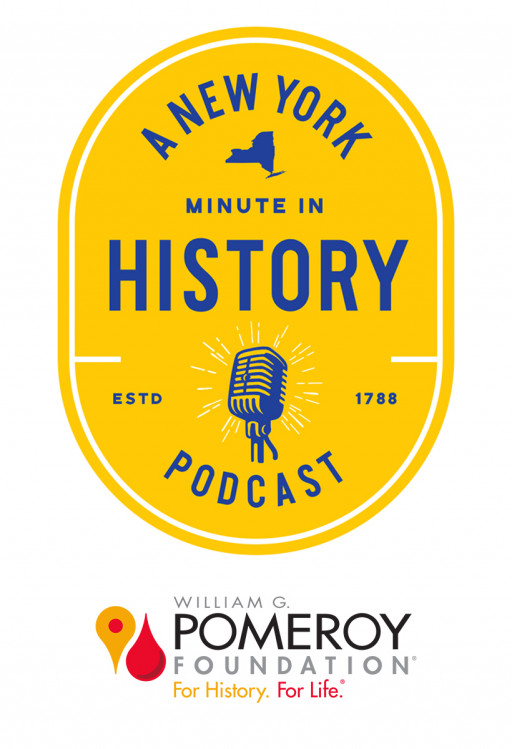 The award-winning podcast A New York Minute In History has launched its fifth season as it continues to explore the unique tales of New Yorkers throughout American history. This new 12-episode season kicks off with the story of an early 19th century excavation of mastodon remains in Orange County - which involved a number of America's Founding Fathers.

New this season, New York state public teachers will be able to earn Continuing Teacher and Leader Education (CTLE) credits by engaging with the podcast episodes.

The podcast is a production of WAMC Northeast Public Radio, the New York State Museum, and Archivist Media, with support from the William G. Pomeroy Foundation®. It is hosted by NYS Historian Devin Lander and Saratoga County Historian Lauren Roberts and is produced by Jesse King and Jim Levulis of WAMC. A New York Minute In History is the winner of a Regional Edward R. Murrow Award, two New York State Broadcasters Association Awards and a Journalists Association of New York Award.

"We are delighted to be able to produce this podcast, which has entertained and informed listeners — including in multiple educational venues — around New York state and the nation," WAMC's President and CEO Dr. Alan Chartock says. "We are thankful to our partners and WAMC's supporters for allowing the podcast to thrive."

The Pomeroy Foundation, a philanthropic organization based in Syracuse, has provided funding to support all five seasons of A New York Minute In History.

"The team working on A New York Minute In History has done an incredible job bringing the stories of the Empire State to life through their award-winning podcast," said Deryn Pomeroy, Trustee & Director of Strategic Initiatives at the Pomeroy Foundation. "With each new episode, audiences experience an in-depth and engaging look at an important facet of our state's history. The Pomeroy Foundation is proud to continue our support for the podcast's exciting fifth season."

The New York State Museum is a center of art, science, and history dedicated to exploring the human and natural history of the state. Established in 1836, it is the oldest and largest state museum in the country. From its beginning, the Museum has been home to some of the nation's leading scientists, including the founders of American paleontology, ethnology, botany and mycology. Its collections rank among the finest in many fields and total more than 16 million scientific specimens and one million cultural objects. Located at the southern end of the architecturally stunning Governor Nelson A. Rockefeller Empire State Plaza in Albany, the New York State Museum welcomes visitors from across the globe and thousands of students each year. Its 100,000 square feet of exhibition space features several new exhibitions per year in addition to long term exhibitions. The Museum also offers a variety of educational public programs for learners of all ages. The New York State Museum is a program of The University of the State of New York / The State Education Department / Office of Cultural Education.

The William G. Pomeroy Foundation® is committed to supporting the celebration and preservation of community history; and working to improve the probability of finding appropriate donor matches or other life-saving treatments for blood cancer patients. Established by Trustee Bill Pomeroy in 2005 to bring together his two greatest passions, the Pomeroy Foundation is a private, philanthropic organization located in Syracuse, N.Y. As the nation's leading funder of historic roadside markers, the Pomeroy Foundation has awarded nearly 2,000 grants for markers and bronze plaques in 46 states and Washington, D.C. To learn more about the Pomeroy Foundation, visit wgpfoundation.org.